Due to the measures with regards to COVID-19, our Canadian office is currently closed. Therefore, we cannot be reaced by phone at the moment. All personal appointments will be take place through video calls (Skype). If this is not an option, appointments will be rescheduled. If you have an appointment with one of our visa consultants in Canada, they will inform you personally about the options.

3 Australian and 3 Canadian cities in the top 10

Each year, ‘The Economist Intelligence United’ publishes the global livability index of cities all over the world. This year also!

The 2018 report shows that not only Australia but Canada as well, both are listed in the top 10 with three cities each. For the first time, Vienna, Austria became first with a score of 99.1/100.

Cities have been assessed and rated on over 30 aspects. Hereby you could think of stability, healthcare, culture and milieu, but education and infrastructure as well. This year, many cities have notified improvements in the ranking as a result of increasing stability in most regions. Thereby cities that appear at the top of the list, seems to have a link. The cities that score the highest are mostly medium-sized cities in wealthy countries.

Six out of ten cities are located in Australia and Canada, with a respective population density of 3,2 and 4 people per square kilometre. 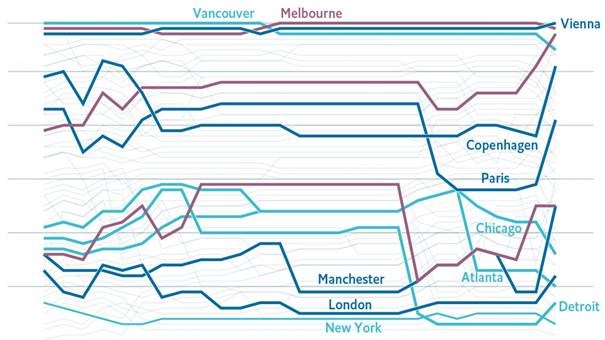 Which visa options do I have?

Would you like to know if you are eligible to apply for a visa? Please fill out our free online visa check. We will assess your visa options and provide you with a personalised advise.

Do the free visa check